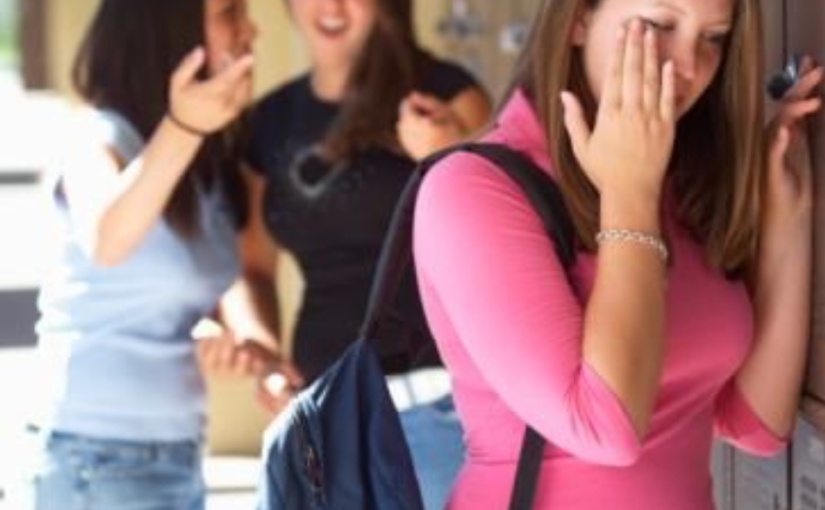 I was 11 or 12 in high school and I remember the vice-head saying this aloud in assembly.

“Sticks and stones may break my bones….but words will never hurt me.”

This message stuck in my head because, a couple of days earlier I had received a scrunched up note from someone in my class, with quite nasty remarks, and it was something that stuck in my head. (Up until today!!)

Being of such a naive and young age, it was exactly what I needed at that time, and I was impressed. Yes. That’s right. I was impressed. I wasn’t bullied physically in school. No. But at phases in high school I have had nasty words been said to me. And this quote actually grew on me…. I mean anything is better then physical pain and bruises?! Right?….Right?

But how true is this really?

Emotional pain is usually disregarded because it cannot be seen. If a person is suffering from a ‘broken heart’ for example, we advise a person to get over it, over a couple of days, we may even get fed up of the person dealing with it. Yet with a ‘broken leg’ we are likely to sympathise until the cast is off, and the person is walking again.

So the same can be said of Verbal abuse. We have a tendency to tell people to forget it, and ignore it without thinking of the consequence, the actual emotional and mental frustration the person could potentially be going through. I myself have been told on numerous occasion not to say anything back, because its not good to ‘stoop’ to the levels of others. But as I grow older i’m realising that it is not good to push this aside, especially when it comes to children.

With the younger generation being more cognitively, and emotionally sophisticated than was understood before. Warning signs have to be looked into earlier. Studies have shown that children who have been bullied in school are more likely to struggle later on in life, whether that be in relationships, in the workplace, or mentally within themselves.

The concept of Bullying has been around for years, its nothing new, and in all honesty unfortunately it will be around forever. However bullying for the younger generation is a completely different culture to that of my age. With the uprising of social media emotional bullying is more evident. It’s called ‘Cyber Bullying’. And the worst part of cyber bullying is… That it’s permanent and it has a wide reach. There is a scar that can be found on the internet, and usually accessed by loads of people.

With Social media it is so much more easier to spread a rumour, to share a embarrassing or humiliating picture or video, to ‘tag’, ‘share’ or even comment on a common page- for the WORLD to see. And the worse part is, it can all be done Anonymously. And a child or adult cannot get away from it, they cannot run away home or a safe place. The internet is something we have access to everywhere and is always with us.

Bullying can make a person feel lonely and worthless, they may develop symptoms of anxiety, depression, lack of appetite, or even go into substance abuse all of which has impact on the health of the individual.

So Sticks and Stones can break Bones, but Words can actually be detrimental to mental health. And both forms of bullying should be looked into.

Signs a person is being bullied include :

Random bruises, withdrawal symptoms (wanting to be alone or not talking much), loss of appetite, changes in behaviour (getting more angry at home for no reason), constant stomach aches or headaches. Loss of confidence, missing personal belongings, Mood swings.

A person who goes through bullying tends to shy away to talk to loved ones on most occasions. If you do notice signs that you may think a loved one is experiencing bullying here’s a few helplines that may be useful for yourself and the loved one:

A 24 hour text service for individuals who are experiencing a mental health crisis. Text are free from most service providers.

If you are 19 or under, then either call in or email the above helpline. Online chatting is also available on the website.

For 25 and under, once again can either call or email, or go online for online chat service with specialised staff

Always look out for signs in friends, family or children, if they become reserved, obtrusive, angry, irritable. Sometimes it’s a sign of mental health issues.

So the thing is… I’m a Muslim…Proud Muslim, with the values, roots, practises and beliefs. I am also an Indian so the cultural aspects and all of the rest of it is also embodied in me. And I’m also British- so I’ve been schooled here, college, university, work the whole cycle…

And I’m sure I’ve tried my best to instill the same values in my boys. On the way to mosque, my Boy asks me, “Mum, would you like… Loose it if I was walking with a girl?, or you or someone else saw me walking with girls?” My son is 16.

Now, going back to when I was his age- meaning 20 years ago- I wouldn’t dare ask my mum or dad that question- it was not a question to be asked, it wasn’t debateable. The answer was “You NEVER should be seen with a member of the opposite sex unless it’s a parent or sibling” that’s not to say it didn’t happen obviously it happened, but it was all about where you were, how public you were, and the whole keeping respect thing….. And pretending you don’t EVER talk to boys! Oh the shame should anyone see you and gossip about you.

So I didn’t know how to answer that when he asked me, not because I thought it’s wrong, but how do I explain the whole culture thing to him when we live in today’s society. My boys are born and bred here. I’d probably laugh if anyone came to me to say that my son was seen around females, but what if the news got to the elder generations? How would we deal with it then? How would they respond to it? And where is the fine line between chilling with females and having a girlfriend?

The absurd thing is, he continued speaking “… We were walking, and the girls saw the Boi (my younger son) and they ran off, so when I asked them why? They said it’s because the Boi might tell your mum. You’ll get into trouble”.

That’s when I started thinking, I really haven’t had a proper conversation with my son… And the fact that he’s asking me this, means he doesn’t know where he actually stands with the situation. So while hes wondering why they ran away, hes never assumed hes doing anything wrong, but hes also puzzled as to why he would get into trouble.

I answered by saying that me or his dad wouldn’t have a problem with it at all. As long as it’s a group of people, then it’s fine. I think it would trouble me if it were just two of them- him and a girl, and if there was any hint of intimacy. That I wouldn’t tolerate (indicating very clearly that hes not allowed to have a girlfriend girlfriend….but a girl-friend is fine- you get me right?) And then I explained how others in the community would feel towards it, and how he should respect that not all parents think in the same way. Obviously the girls that ran away had reason to, and therefore he should respect that they have a different understanding in life as opposed to him (I was quite shocked at this, I thought my parents generation was the last of the generation to have this mentality)

Right- so I know non- Muslims are looking at the fact that I told my 16 year old hes not allowed a girlfriend. Yes. I did. And Yes I will, because hes not allowed Islamically. And my boys go to mosque and are brought up in a Islamic household and in all honesty they know this anyway. It’s not something they will argue over, but whether they choose to do it behind my back is another question entirely. As a Muslim parent I’ve done my part.

But I question whether this is the right way of parenting? I mean if my son was ‘caught’ (can you see the language we use! I’m ashamed of using it myself! ) With a girl- my mum would call it bad parenting on my part as I wasn’t strict enough and keeping an eye on him. And my mother in law would be ecstatic and ask me when we would be holding the wedding!

I wouldn’t want it to be either way, I’m not getting my 16 year old married, and I’m definitely not a bad parent…. Or am I?

Going back to the beginning- I said I would never ask my parent the same question my son asked me, well why? My parents never spoke to me in the way I speak to my children. They never have. And they probably wont. I remember seeing my parents as elders, and people who have rights over me. My boys however are my friends, we have laughs, we joke, we wrestle, we cuss each other, we flick each other in the head, and we embarrass each other in public- by Purpose. So is my parenting style wrong?

Now the thing is- this got me thinking… What if I find out he does have a girlfriend? What would I do?

Islamically the answer would be marriage. Culturally I need to lock him up and throw away the key and deprive him of all communication (yes. That’s no lie). And as a British woman- just let him have fun.

So where do I stand with this- because all of it go against each other? The good thing is- I don’t have to think about that… Yet. But it still worries me.

The reality is I would NEVER get him married at this age! (Is it even legal?). So would I stop him from seeing her? (Hes bigger and taller than me! So I don’t know how I would manage locking him up (that’s a joke!!) ) but I definitely wouldn’t encourage him to continue.

So how do I stand and how do I face this problem as a British, Indian, Muslim?

Would love and appreciate your thoughts on this.