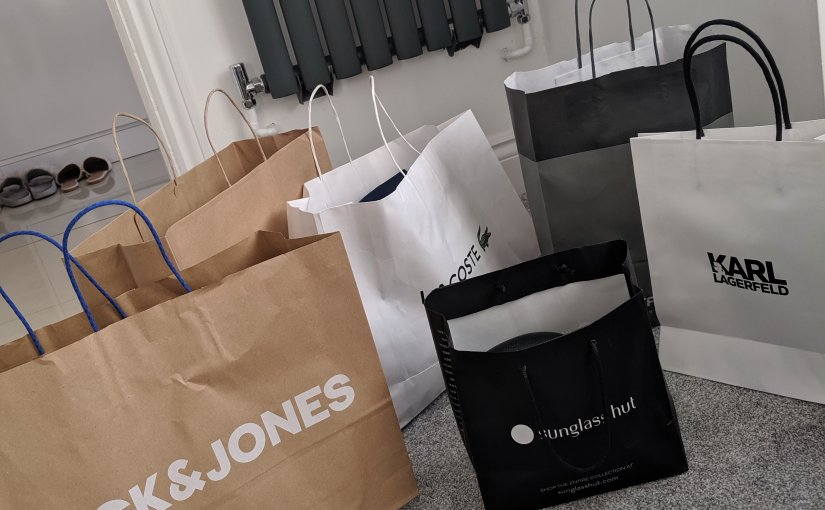 After our over indulgence of hashbrown and brown sauce we headed off to Cheshire Designer Outlet.

Being just under 4 miles away, it takes us 10 minutes max to get there. Hence why we choose the Holiday Inn at Ellesmere Port with the banging hash browns.

Knowing full well that we wouldn’t be shopping much- as the sales hadn’t started we thought it’d be nice to just see what we could get if anything. If not- a nice stroll will do.

It started off steady- just walking in and out of shops. I found myself a wallet from Karl Lagerfeld, and it suited what I needed. A wallet is something that everyone gets fussy about. I need a big coin pocket inside because I forever have change. I don’t know why, but I just do. And this had that. I don’t like too much fuss on my wallets. Plain and simple does it. It ticked the boxes and so it went into the basket.

Next we stopped at G-Star. The eldest boy wanted jeans, he wasn’t after G-Star jeans in all honestly. He had seen some in Topshop for £40 which he was going to get once home. Here the jeans were 2 for £95. It would be stupid of him not to get these instead.

We always stop for some doughnuts and tea mid way. And the Doughnut Diner has the best Doughnuts.

After our short break -back to shopping again, I was quite surprised that some shops had sales going on, usually at this time of year- you get the normal 20% off, but that’s about it. But alot of the shops had something on top of the 20% aswell.

Going in and out of shops, we ended up spending quite a bit of time in Lacoste. I would say 90% of my husband clothes are from Lacoste, and that includes trainers too. He really should have some sort of loyalty offer/ card from them.

And that’s another 6 tops added to his collection. He got all 6 for £267. Not exactly a bargain as in December time it does get alot cheaper, but we do struggle with sizes and colours so he picked it up.

I was content with my wallet, I had purchased one thing- that’s enough for me untill…. I stepped into ‘The Sunglass Hut’. I do have a weakness in this shop- so I really should have known before I walked in, I’ll get something… But today the offer was better then I’d ever seen before… Buy first pair- get second pair at 70% off…

I got both at £136. Usually I pay more than this for one pair. The hubby dearest was so pleased he paid for them. Extra bonus. And I now have my sunglasses ready for my next holiday (hopefully I don’t loose them. I have a tendency to loose or break my frames- it’s not Evan considered news anymore. If my frames survive a holiday, then that’s news worthy!)

My 2 nephews have there birthdays coming up, 3 weeks apart, and the Adidas store had a good sale, they go for football together every Saturdays, so football boots seemed like the best thing to get for them for their birthdays.

Both trainors were for £32, usual price being £40 for the one pair. Another thing added to the Amex.

We also picked up a few bits and bobs from jack and jones for the boys at standard price- just to top them up.

So all in all we had a very productive day, more productive then we thought we would (no complaints off me).

We then headed off to fill out bellies. Shopping is exhausting and almost like a workout. We headed off to none other than the famous Wilmslow Road. We wanted to try something different. We almost always do, so we told ourselves whilst walking around let’s see what we find and decide….. We ended up in our normal spot. Antalya Cafe.

We had lamb chops, chicken tikka, chicken shawarma, and chips, and it was just as good as it’s always been.

And then we made our way home.

Seriously? When did chiverly die? Like he wants a nap while I drive home? Who does that? What happened to driving the woman around? We got something wrong when we asked for equal opportunities. Driving should have been left to the men.

All in all – a spontaneous trip cost the hubby just under £800. I’m up for going next weekend too! Hehe